This was Goldstar’s first Q at DeHaviland. YHC decided to not let up on the PAX today. So we were going to utilize all of the spots we could but also doing YHC’s favorite, 100 burpees. First off we mosey’d on over to the dock. Our this is where we did our first 20 burpees. YHC instructed to hold a plank or do a push up and reach one hand in the air, rotating sides until the six was finished.

Then we mosey’d again. Original thought was to do a regular jog, 10 burpees, jog, 10 burpees until the end. However, PAX was instructed to do 10 more burpees, hold the six and then we took a different direction…

Next we mosey’d up to the flag memorial area of the park. Here each pax was instructed to do 20 jump ups on the ledge and 50 airsquats. After the six was finished, we then did 20 incline push ups IC followed by 20 decline push ups IC. As if that was not enough, we then did 20 dips IC. The only way to describe our arms was “jello”. This was not going to get in the way of our 100 burpees though. If you’re keeping count, we are at 30 at this point and this is where we did our next 10.

On our trip back down toward the lake-pond thing, an abandoned tennis ball was procured. We walked down the grassy knoll and checked on some belongings that were left behind on a park bench. No identifying items were found, so the bag was left behind. Now, about that tennis ball…

YHC decided it was time to finish our burpees. However, with our new tennis ball, we were going to do this by playing a game a fetch all the way back to the flag. YHC asked for a 10 count at each stop, then did a quick pitch of the ball and counted down from 5. PAX then sprinted to the ball and did their next set of 10 burpees. We did this all the way back to the flag completing the 100 burpees.

Once back to the flag, we had 5 minutes to spare. YHC doesn’t like to waste time so we immediately headed into our last exercise. A half set of roasted pig. We were able to get in a set of leg lifts, pushups, flutter kicks, push ups, american hammers and pushups.

This completed our beatdown. 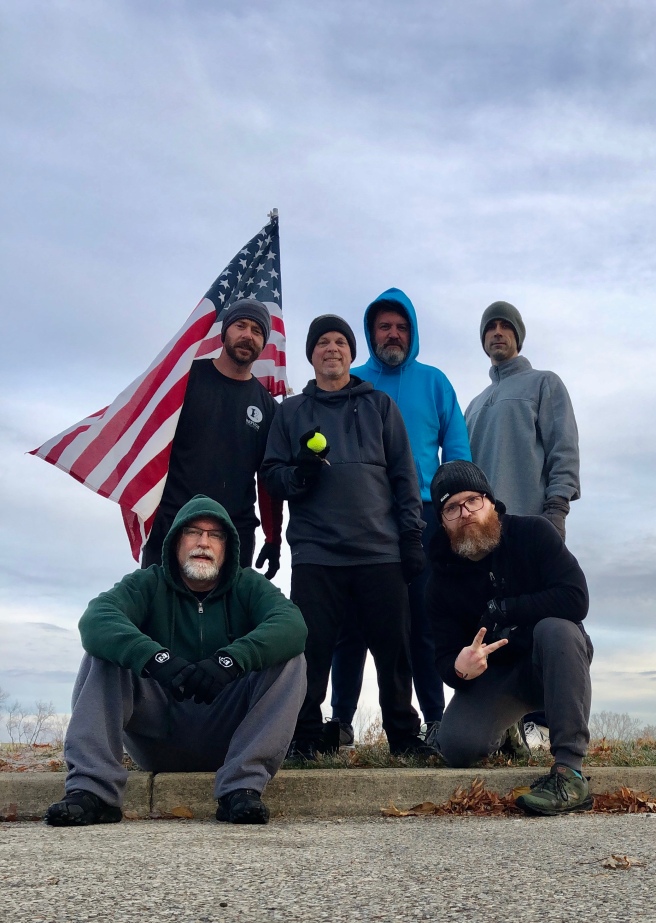 View all posts by goldstarF3

the best decision you'll ever make